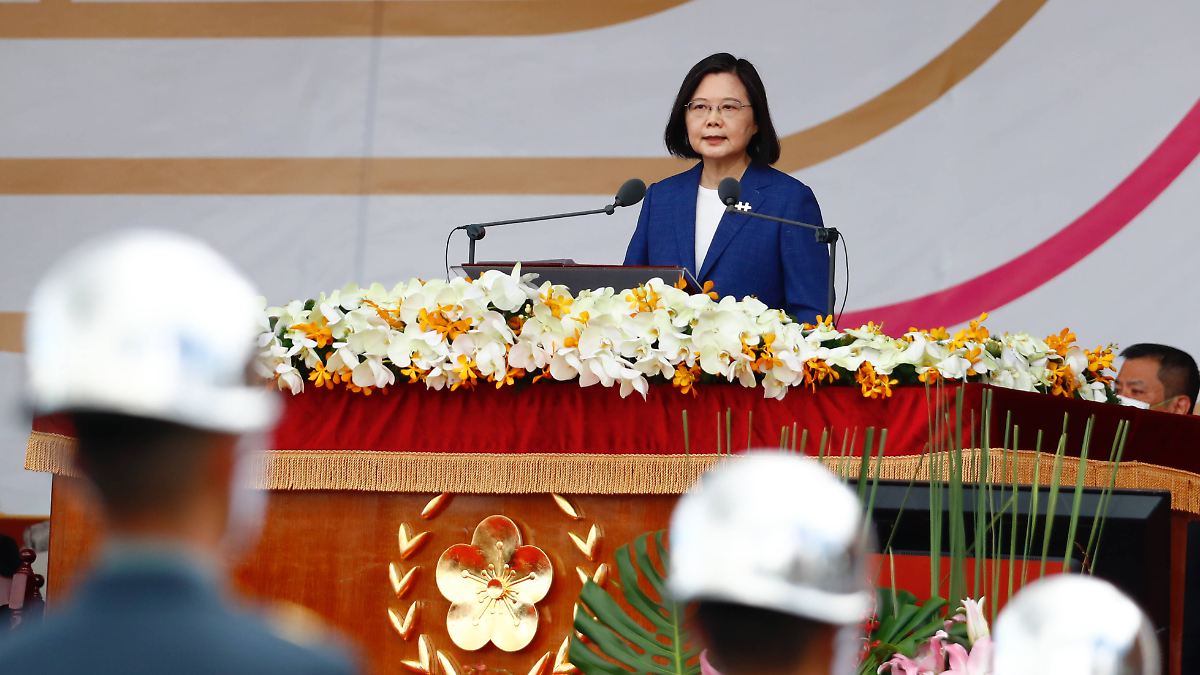 ‘We will defend democracy’

The People’s Republic of China recently reiterated its desire for “peaceful” reunification with Taiwan. Cancellation follows from the island. Taiwan President Tsai stresses that one will not succumb to pressure. But the military threats from the big neighbor are becoming more and more apparent.

Taiwan President Tsai Ing-wen rejected Beijing’s call for “reunification.” “No one can force Taiwan to follow the path China has planned for us,” Tsai said in a National Day speech. Taiwan hopes to improve relations with mainland China. “But there should be no illusions whatsoever that the Taiwanese people will succumb to pressure,” he added. Taiwan is “at the forefront of defending democracy”.

Chinese President Xi Jinping had earlier reiterated China’s demand for a “peaceful” reunification with Taiwan. “The complete reunification of our country will and can be achieved,” he said on Saturday.

Xi, who also warned against foreign interference, said Taiwan independence is “the biggest obstacle to the reunification of the motherland and a grave hidden danger.”

Tsai renewed her willingness to speak and urged Beijing to engage in dialogue “on the basis of equality.” At the same time, it warned its citizens of the global political consequences of changing the status quo in the relationship between Beijing and Taipei. “Every step we take will affect the future direction of our world, and on the contrary, the future direction of our world will affect Taiwan’s future.”

Tensions have been rising for years

Military tensions between Beijing and Taipei have been rising for years. Beijing considers Taiwan, which seceded from China in 1949 after the victory of the Communists, a breakaway province that must be reunited with the mainland – if necessary by military force. However, Taiwan has never been part of the People’s Republic of China.

Since Tsai, who is much more critical of China than her predecessor, was elected president of Taiwan five years ago, China has also increased economic and diplomatic pressure on the island. All official communication channels that existed until then were closed. Tsai describes Taiwan as a “really independent country” and not part of “China”. However, no steps have yet been taken to formally declare independence. Beijing has long warned that this is a “red line” that could lead to an invasion.

Polls show that the majority of the island’s population does not want to be ruled by Beijing. Most Taiwanese support maintaining the status quo. However, more nationalist attitudes are on the rise, especially among young people. Many fear that Taiwan will face the same fate as Hong Kong if Chinese influence increases.

Hong Chen Lun, who watched the National Day celebrations on Sunday with his two children, said of China’s call for reunification, “As a Taiwanese, I don’t think we can accept that. Just look at what happened in Hong Kong.”

Audience member Zhan Yunqing said that many of his compatriots felt powerless. “Reunification at this time is not appropriate. But we are not in a position to declare independence because the international community will not recognize us. It is useless.”

READ  Pension: The award-winning rat retires - it saved a lot of people's lives
Related Topics:
Up Next

Dead and injured in a plane crash in Russia

READ  New injuries in the United States: "We shouldn't have come this far"
Continue Reading

READ  Pension: The award-winning rat retires - it saved a lot of people's lives