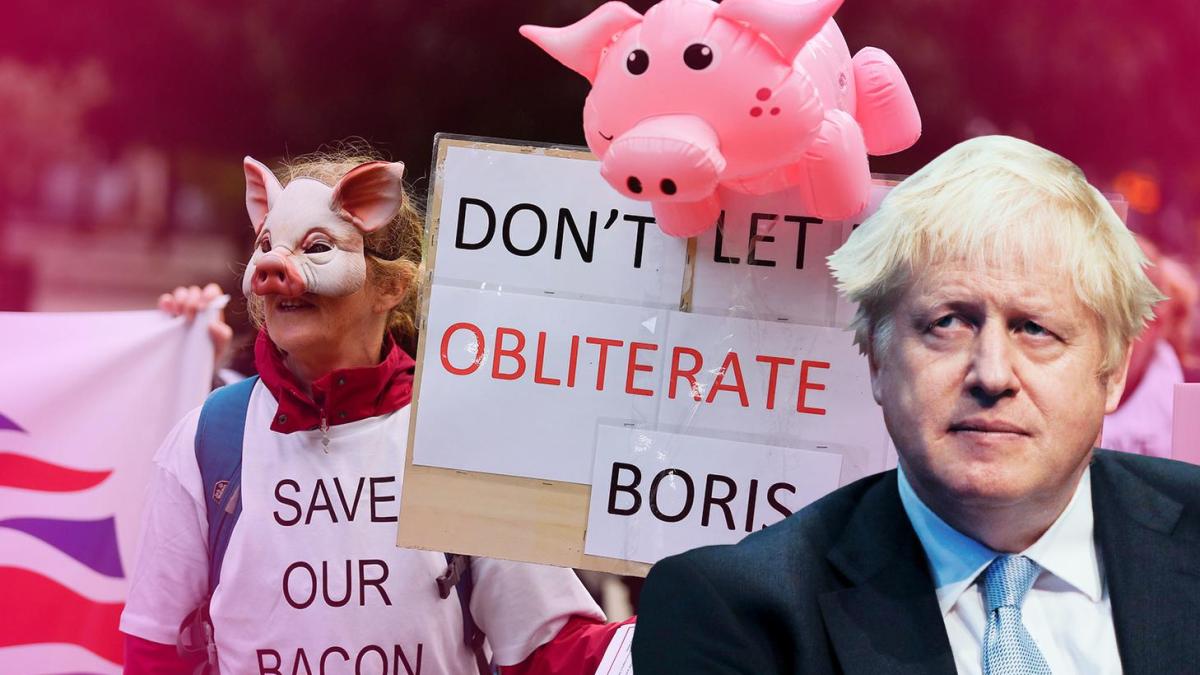 sThe fuel crisis in southeast England has been going on for nearly two weeks. “Does anyone know where to get petrol from in west London this morning? Otherwise I wouldn’t be able to work,” a desperate motorist exchanges over local networks.

Meanwhile, pig farmers are demonstrating in front of the Midland Hotel in Manchester, where Boris Johnson’s Conservative Party is holding their caucus. With thousands of butchers missing, 120,000 heads face emergency slaughter. Supermarkets are warning that Christmas can’t just be missed during the usual holiday period because supply chains are collapsing due to a shortage of workers.

Are we in crisis, the BBC presenter asked the Prime Minister on Tuesday morning. Johnson’s quick reply was “No.” “Quite the contrary. It is the massive awakening expected for the UK and global economies that is now putting pressure on supply chains.”

And no, Johnson will not reopen the doors wide for “cheap labor” from Eastern Europe. It will put an end to the “failed model of low wages, poorly trained workers and low productivity” forever.

With the Brexit referendum in 2016 and his election as prime minister in 2019, “the people voted to end this broken model,” Johnson is convinced. Now it was a “very interesting moment” – as he put it – for the British prime minister to finally send Britons out into the post-Brexit world. A world where the term “crisis” has no place. Johnson said what his country is currently going through is really an “adjustment period”.

It’s a high-stakes project that conservatives approach with the usual flexible optimism. After the enlargement of the European Union in 2004, no country in Europe took in as many workers as the United Kingdom, and the entire economic model has adapted accordingly. With Britain’s exit from the European Union, London regained control of its borders and thus of immigration.

Which is why everyone now has to overcome the big hurdles to want to stay in the country on a permanent basis: a permanent job offer is one of the requirements, or the equivalent of at least 30,000 euros in annual salary, or an expensive visa fee, or meet the conditions strict. Exceptional international talent standards.

On the continent, Johnson’s perilous revolution is closely watched. “There is some joy,” admits EU representatives behind closed doors. After 18 months of pandemic paralysis, the effects of Brexit are becoming visible to the general public for the first time.

The abolition of freedom of movement in the European Union means that unrestricted immigration to the UK labor market is over. Why, for example, there are no drivers for heavy and dangerous transport who deliver to gas stations. Just like the butchers from Eastern Europe who do the hard work in the meat factories.

The presentation dilemma illustrates how difficult it is for Johnson to reconcile theory and practice at the moment. Industry representatives have calculated that the country needs about 100,000 truck drivers to ensure the supply chain. Business representatives called to Downing Street in mid-June and asked the prime minister to release visa quotas in light of the end of the pandemic and the Christmas business.

It was another three months before Johnson moved on, as he publicly demonstrated his reluctance. Because the Conservative Party base as well as its new constituents in the former working areas do not exactly want this immigration, which in their eyes was the cause of lower wages and deteriorating living standards.

Despite this, the government has approved 300 visas for heavy transport drivers in a short time, and an additional 4,700 permits will be granted at the end of October. However, according to research by The Times, only 27 EU applicants have been registered in London as of this week. “People don’t come if the job isn’t really attractive. Why should they forego a well-paid job for a slightly better-paying job that’s limited to a few months?” Quoted by Rod Mackenzie of the Road Transportation Association.

But Downing Street is not shy about confronting its economy. Criticized by the government for too long, local companies used to get workers easily and cheaply from abroad instead of investing in their own people and production techniques.

Johnson’s approach is undoubtedly risky. Inflation is expected to rise to more than four percent in the last quarter of the year, primarily driven by higher energy prices. Multiple extended programs for short-time work are ending these days, and a weekly support allowance of 24 euros is being provided due to the pandemic, which six million very low-income families have received since the start of the Corona crisis.

According to a study by the University of Liverpool, it affects nearly 300,000 children whose families will fall below the official poverty line with this support removed. Do not forget that the conservative government is planning various tax increases to integrate the budget in 2022. The government was forced to finance the equivalent of 475 billion euros due to the Corona pandemic. Empty shelves at Christmas can overshadow the British’ long-suffering in the face of these challenges.

READ  Heavy fighting between Taliban and opponents in Banjir Valley

READ  Entering the Netherlands: an express test is required - this applies to daily flights of less than 24 hours and cross-border traffic